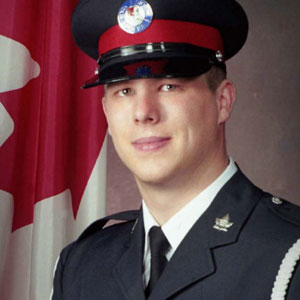 Make a Donation in Memory of Cst. Garrett Styles

On Tuesday June 28, 2011 Cst. Garrett Styles, 32, a seven-year veteran of the York Regional Police, was struck by a vehicle on Highway 48 near Herald Road in the Town of East Gwillimbury. Just before 5 a.m. Cst. Styles initiated a traffic stop pulling over a 2005 Dodge Caravan with four occupants. Cst. Styles was investigating the driver and was at the driver’s side door when the vehicle accelerated dragging him approximately 300 metres before the vehicle lost control and rolled over, pinning Cst. Styles. Firefighters with the East Gwillimbury Emergency Services extricated him and he was rushed to Southlake Regional Health Centre by York Region EMS, where he tragically succumbed to his injuries. The unlicensed driver, a 15-year-old male from York Region was also taken to the hospital with serious injuries. The other passengers, also youths, are cooperating with police.

Cst. Styles joined York Regional Police as a Cadet-in-Training in December 2003 and became a Constable in May 2004. He worked Uniform Patrol in #2 District, covering Richmond Hill and most recently in #1 District, covering the Towns of Newmarket, Aurora and East Gwillimbury. His father, retired Staff Sergeant Garry Styles, was 33-year member of York Regional Police who just retired in January.

Cst. Styles is survived by his wife, Melissa, and a two-and-a-half-year-old daughter and nine-week old son.

Our condolences go out to Cst. Styles’ family, friends and colleagues.