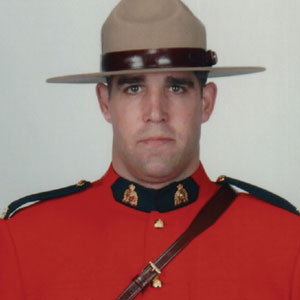 Make a Donation in Memory of Cst. Richer Dubuc

On March 6, 2017 42-year-old RCMP Constable Richer Dubuc was killed while patrolling with the Integrated Border Enforcement Team at Saint-Jean-sur-Richelieu.

Constable Dubuc was responding to a call on the country roads near the border of Quebec and New York State when he lost control of his vehicle, hit a tractor, left the roadway and impacted into a tree. He was taken to a nearby hospital but later succumbed to his injuries. The investigation is ongoing.

Constable Dubuc was a seven-year member of the RCMP, beginning his career at the Codiac Detachment in New Brunswick. In January of 2017 he joined the Integrated Border Enforcement Team based in Saint Jean-sur-Richelieu in Quebec. Policing ran in the family, with his brother serving as an officer with the Minneapolis Police in Minnesota.

Constable Dubuc, a native of the region of Joliette, was married and the father of four children. Our condolences go out to his family, friends, and colleagues.