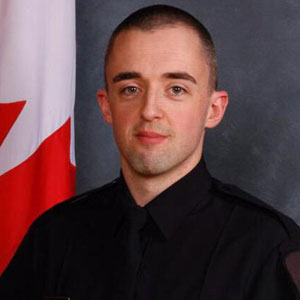 Make a Donation in Memory of Cst. Dan Woodall

On June 8 2015, at approximately 8 PM, 35-year-old Edmonton Police Constable Dan Woodall and his partner 38-year-old Constable Jason Harley were executing an arrest warrant in the West end of Edmonton. Shots were fired from inside the house killing Cst. Woodall and injuring Cst. Harley.

On Monday evening, constables Woodall and Harley, of the Edmonton Police Hate Crimes Unit, were in West Edmonton attempting to execute an arrest warrant. As they approached the house, shots were fired through the door hitting Cst. Woodall and Cst. Harley. Cst Woodall died at the scene. Although injured, Cst Woodall, along with the other officers managed to make it to cover. The suspect continued to shoot at the police while the officers were unable to return fire. During the shootout, the suspect’s house caught fire, believed to be started by the suspect. Once it was deemed safe, the fire department moved in to fight the fire. Afterwards they found a body in the basement of the house, which is believed to be that of the suspect’s.

Constable Dan Woodall was an eight year veteran of the Edmonton Police Service, recruited from the Greater Manchester Police in England. Woodall leaves behind his wife and two young children. Chief Constable Knecht stated “Const. Woodall gave his life tonight in service of the citizens of this city and to this country. His job was to protect all of us from harm, victimization, and from criminal activity.”

Our condolences go out to his family, friends and colleagues.