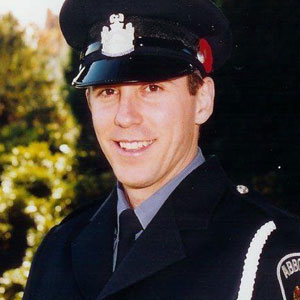 Make a Donation in Memory of Cst. John Goyer

On September 26, 2001 Cst. Goyer and his partner responded to a threatening call in Abbotsford, BC. Cst. Goyer and other officers on the scene attempted to take the suspect into custody and a violent physical confrontation erupted with Cst. Goyer being hit several times violently about the head. On the days that followed Cst. Goyer’s health continually declined as he was eventually diagnosed with ALS. Medical professionals and Worksafe BC concluded that Cst. Goyer’s ALS was directly related to the fight and his employment as a police officer. In subsequent months Cst. John Goyer’s health declined rapidly.

The illness and eventual death of Cst. Goyer was a tragic and drawn out battle for him. Throughout his fight he remained positive, determined and courageous. As a police officer Cst. Goyer carried out his duties with distinction and quiet dignity.

Cst. Goyer passed away peaceafully with his family and friends by his side at MSA Hospital in Abbotsford BC on April 19, 2006.