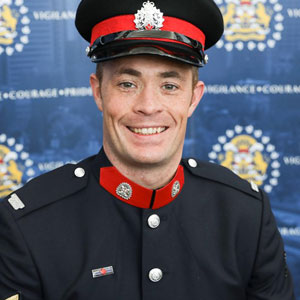 Make a Donation in Memory of Sgt. Andrew Harnett

On Thursday December 31, 2020, Calgary Police Sergeant Andrew Harnett was struck and killed by a vehicle fleeing a traffic stop.

Late New Year’s Eve night, Sgt. Harnett, 37 years of age, was involved in a traffic stop in the area of Falconridge Blvd. and Falconridge Dr. NE. During the traffic stop, one vehicle fled striking Sgt. Harnett. Other officers were nearby and rendered first aid right away. Paramedics and fellow officers fought to save Andrew’s life but he succumbed to his injuries and was pronounced dead at the hospital just before midnight. Two suspects were identified and warrants for first degree murder were issued for their arrest.

Sgt. Harnett served as a military police officer for 2.5 years prior to joining the Calgary Police Service in September 2008. He worked patrol and recruiting. He was promoted to sergeant in April 2019 and was assigned to patrol in charge of a team. Andrew was a recipient of two Chief’s Award for Life Saving and the Rob Vanderweil Memorial Award.

Sgt. Andrew Harnett leaves behind a common-law wife. Our condolences go out to his wife, family, friends and colleagues. He will be remembered.